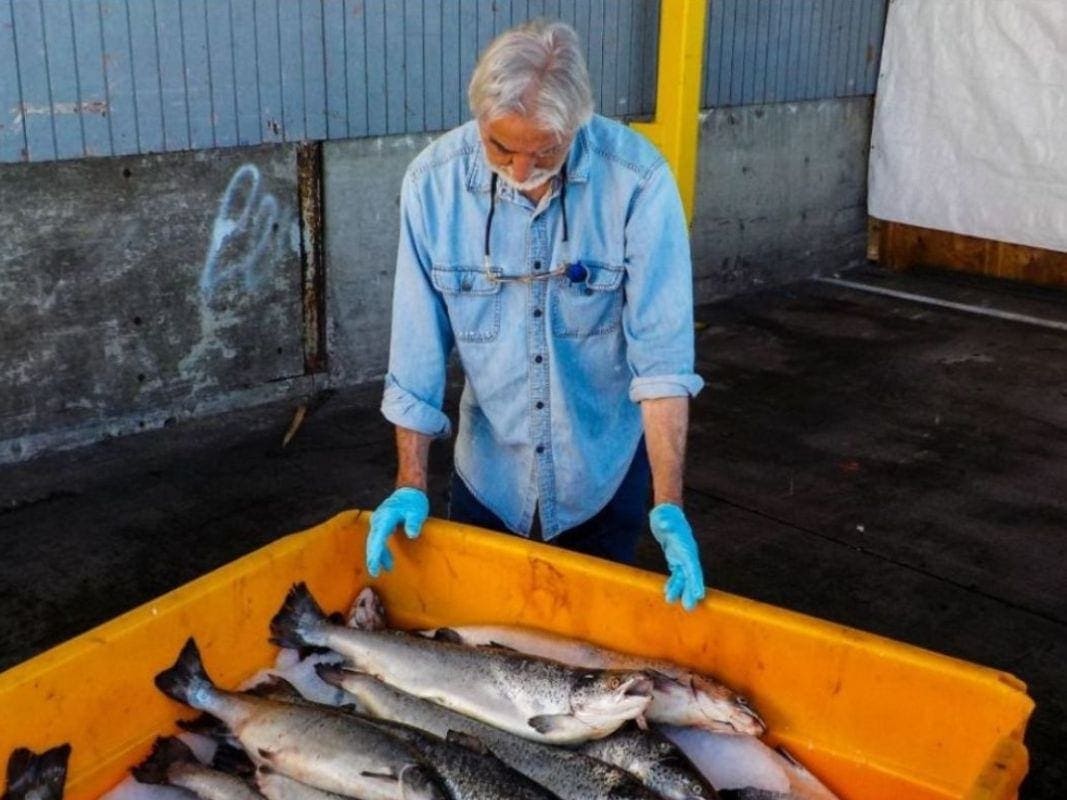 In light of Washington Department of Fish and Wildlife’s (WDFW) response to Wild Fish Conservancy’s (WFC) press release on February 15th, we stand firm behind our original statements, and aim to briefly but fully clarify our position on the matter of Piscine Reovirus (PRV) of Norwegian origin found in escaped farmed Atlantic salmon in Puget Sound. It is our intention that this clarification will dispel any charges of inaccuracy when it comes to the PRV threat.

As is stated in the original release, WFC received independent lab results confirming the presence of PRV in 19 of 19 farmed Atlantic salmon tested that had escaped from a large-scale escape event off of Cypress Island in August 2017. Furthermore, testing of the samples showed the strain of PRV to be of Norwegian origin. Specifically, the S1 gene from tissue samples from eight of the 19 fish were sequenced and all identified as Geneotype 1a, which is known to be of Norwegian origin.

We take issue with a number of claims made by WDFW in response to this press release, mainly that the agency did not attempt to accurately represent WFC’s views on the matter, and that WDFW is not taking an appropriately precautionary approach when it comes to evidence of a potentially harmful virus being proliferated in Washington’s public waters.

WDFW mischaracterizes our view regarding the Heart and Skeletal Muscle Inflammatory (HSMI) disease. In the press release we accurately state that HSMI has caused up to 20% mortality in Norwegian net pens. We also state that PRV is known to be the causative agent of HSMI, which has been well documented.

We do not claim, however, that HSMI has been shown to occur in wild Atlantic or Pacific salmon and steelhead. We do not confuse HSMI with PRV, but we do express unease over PRV’s demonstrated relationship to the lethal disease. We are clear that our primary concern is with infection of the virus itself and the concerning possibility that it may cause harm to wild salmon and steelhead, particularly juveniles.

In the press release, WFC states:

“As PRV builds up in a salmon’s red blood cells, the virus may reduce the amount of oxygen cells can transport to the fish’s muscles, lowering the fish’s performance. For a wild fish, reduced performance means a reduced ability to capture prey, evade predators, and swim upriver to spawn.”

This quote identifies a credible biological mechanism by which PRV infection may lead to increased mortality in wild salmon and steelhead. Even in the absence of HSMI, there is the potential for PRV infection to harm wild fish. We believe this potential for harm should not be taken lightly, especially considering the status of the wild ESA-listed salmon and steelhead in Puget Sound.

PRV. In a recent broad effort to survey for disease among Alaska and Washington, only 4.6% of Chinook, Coho, and steelhead sampled in Puget Sound tested positive for the virus, a finding that dispels the notion that PRV is ubiquitous among wild fish. Similarly, Norway’s wild salmon disease surveillance program data shows that escaped farmed Atlantic salmon in wild salmon rivers have much higher levels of PRV infection (55% of fish sampled) than either wild-origin conservation hatchery brood stock (24%) or wild salmon (13%). Lacking data that would indicate the absence of the disease prior to escape, WDFW cannot state with any amount of certainty that the disease was contracted in the days following the escape.

As for the issue of the virus’ origin, WFC strongly disagrees with WDFW’s implication that PRV in Puget Sound and the Salish Sea originated in the Pacific Northwest, rather than being imported from Norway. Our independent lab results identified the S1 gene samples of Atlantic salmon as Geneotype 1a, which is known to be of Norwegian origin. WDFW’s implication that the virus is native to the Salish Sea is, at best, highly controversial. Our evaluation of the recent scientific literature on this issue leads us to conclude, in agreement with a majority of researchers who have published on the matter, that it is highly improbable that PRV is native to the eastern Pacific Ocean, and that its presence in Puget Sound and the Salish Sea is the result of importation from Norway.

Much of WDFW’s reply treats the press release as if it were a detailed scientific article, rather than a news brief presenting a summary of critical information. In the release WFC provided members of the press and public with references to the relevant scientific journal articles that informed our position; those interested in digging deeper are encouraged to dig deeper. Still, a press release is necessarily brief and general. It is not a scientific document, and a reviewer should not treat it as such. The testing of the tissue samples from the Atlantic salmon that escaped from the Cypress Island pen, the general results of which we announced in the press release, is part of an ongoing collaborative research project soon to be published in a major scientific journal. Contact information has been provided at the bottom of this press release, please don’t hesitate to contact WFC to request more information regarding the information provided in this release.

When it comes to the impacts of PRV on our wild salmon and steelhead, the science strongly indicates that Washington state agencies need to take a measured and precautionary approach, not a dismissive one. In Puget Sound, wild Pacific salmon and steelhead find themselves at considerable risk, with several species threatened with extinction and many surviving at only a fraction of their historical abundance. Even a small amount of risk from the spread of PRV, compounded with the other stressors our wild fish populations face, has the potential to bring about disastrous consequences to already imperiled wild salmon and steelhead. Due to this concern, a measured and precautionary approach dictates that state agencies must err heavily on the side of caution.

To date, WFC has not seen sufficient evidence from either of these entities that PRV will not harm wild fish. In standing firm on our concern over the impacts of PRV to wild Pacific salmon, WFC calls on WDFW and other state agencies to accomplish the following:

We maintain that these actions are essential to ensure that PRV-infected fish are not being planted into public waters and that Atlantic salmon raised in net pens are not amplifying and spreading the virus in public waters where it places our native salmon and steelhead at risk.

Or email us at:
[email protected]